Nobody's in my class: memories of the first day of school

Children may be the leaders of tomorrow, but as another school year begins, they’re the grumblers of today. It’s back-to-school time, when kids bemoan the end of summer and parents look forward to seeing their little Einsteins learn new things, strive for new goals and leave the house for eight consecutive hours.


For students in the elementary grades, the learning begins before they even get to a classroom. They arrive at school, scan through the names on the class lists, and then learn that the world has ended. 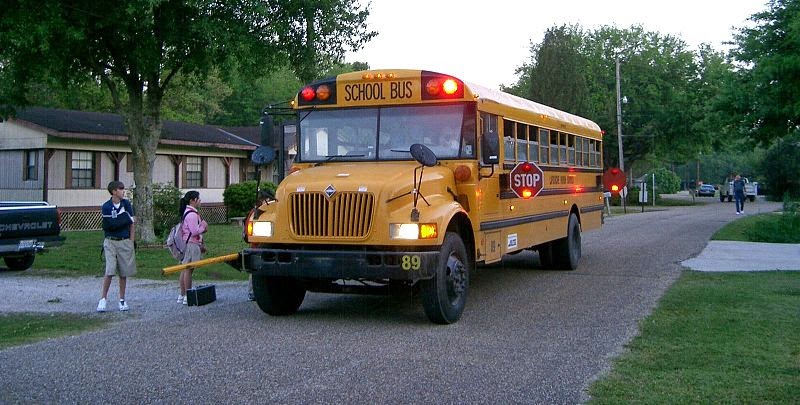 I don't have any friends in my class!


I remember feeling that pain, and that’s saying something because I don’t remember much about elementary school. My recall of the first through fifth grades is a spotty mental slide show of classrooms, teachers and playground equipment that was so fun it was later considered unsafe. I also have scattered memories of fundraisers that made me a door-to-door salesman for Cajun summer sausage, jalapeno cheese spreads and pecan logs.


Most of it is pretty hazy. But my memories of the first day of school are still pretty sharp, probably because it was such an emotional event. For pre-teens, finding out who is in your class is like playing the lottery.


At Horizon Elementary, home of the fightin’ Panthers and famously injurious merry-go-round, the class rosters were posted on a brick wall near the main entrance. Parents and kids gathered around the dot-matrix printouts, squeezing together near one of the water-fountain troughs. Remember those old-style fountains? They allowed up to four kids, thirsty from running around on the playground, to be simultaneously repulsed by lukewarm water.


Dressed in a polo shirt and corduroy shorts (ah, the Eighties!), I walked up to the lists. My heart was pounding. My stomach was twisting. And then my eyes were scanning, just like the kids around me, to discover my fate for the next nine months (aka forever).


No matter what the lists revealed, I tried to absorb the news well. But there were always kids in tears. It was like a group audition for one of those melodramatic ABC Afterschool Specials that taught children important lessons about drugs, teenage pregnancy and bad acting.


The fightin’ Panthers ... yes, we were ridiculously overdramatic. But the students involved didn’t feel that way. When you’re 7, 8 or 9 years old, it’s difficult to have perspective on anything. Everything is over the top and bubbling with emotion, good or bad. Everything rates just short of euphoria or armageddon.
When I was placed in the same third-grade class with my two best friends, it was that amazing. I had been attending church and Sunday School classes for years, but having my best friends in my class was the confirmation that God existed. Not only did God exist, He had enough time in his busy schedule to sort classes at Horizon Elementary.
But then came the next year. My friends and I were split up, probably not coincidentally, and the world was totally unfair.


“Now you can make more friends,” my parents said.

As a fourth grader, I didn’t want to hear that. But as a parent, that’s the best advice I can offer my kids when the class lists disappoint them. It’s what I would tell any back-to-schooler who feels cheated by his or her new class.


Your best friends weren’t always you best friends, you know. You didn’t bond in side-by-side bassinets at the hospital. You were strangers when you met, and then you got to know each other and became friends. You cemented your friendship through time spent together in class, at recess, and in some cases, at the nurse’s office after daredevil jumps off the spinning merry-go-round.


I’m sure no kid wants to hear that “look on the bright side” lecture. But the students surrounded by unfamiliar faces, especially those kids starting at a new school, can think of it as an advantage. The ability to meet new people, make friends and get along is a great skill to have in this world. This will be a way to improve those skills.


But by the time their elementary-school memories are turning fuzzy, it should be more clear.
***
You can use the buttons above to share the column. Click "Follow @wixonhumor" to get a Twitter update for new columns. To get columns by e-mail, type your address in the box under "Receive columns by e-mail" near the top right of this page. Thanks!