Kid fundraisers: Striking out one door at a time

- April 12, 2016
The people in my neighborhood are generally the friendly sort, but you won’t get that vibe when you approach their homes. There might be a welcome mat out front, and possibly some cute wooden cutouts and whimsical garden decorations, but then you’ll meet the bouncer at the door.


Sometimes it’s a homemade sign; sometimes it looks professional. A few are really bold, with that big, screaming red slash that we’re used to seeing on no-smoking signs. Many of them include the word “please,” adding some politeness to the message that we don’t want to hear about a free roof inspection, or a TV/phone/Internet bundle, or an unbeatable price for pest control.


Pest control? But Mr. Salesman, you are the pest. Ha-ha … zinger!
Yeah, well it’s not so funny when you become the pest. And last month, I became that pest as I sold mulch door-to-door with my 10-year-old son, Cooper. 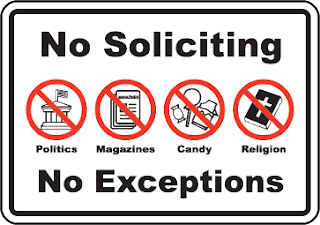 So how did it go?


Cooper was raising money for his baseball team, so I’ll use a hardball analogy and say that we struck out. We struck out a lot, and we struck out spectacularly. It was like we didn’t even know where the ball was, or we weren’t standing near the plate, or we were blindfolded and swinging at Cole Hamels’ fastballs with a pool noodle.


Actually, it was Cooper who had to feel the rejection. He was the one at the door, with a clipboard in hand and wearing his team shirt and baseball hat, giving the spiel about types of mulch and manure and saying “um” over and over. Then he would turn to leave and walk to where I was waiting on the sidewalk, out of view.


Hey, at least the guy opened the door. Back to the baseball analogy, I think that counts as a foul tip. Or at least taking a good swing at a pitch.


Our success rate, probably better described as our failure rate, was expected. Even people who don’t have “no soliciting signs” are a tough sell on the mean streets of door-to-door commerce. And it’s not like Cooper was seeking donations to help end world hunger or buy mosquito nets for Africa. His first-world problem didn’t deserve a second thought, especially when it seems everyone is raising money for something. (Go check out the GoFundMe website and you’ll see funding requests for things such as tattoos, birthday parties and tattoos for birthday parties.)


Still, I wanted Cooper to give it a shot. I figured he should at least feel like he was putting in some effort to support his favorite hobby. I know that’s why I had to go knock on doors when I was a kid, and even if I omit the old-man part about walking through two feet of snow and uphill both ways, I had it worse than my kids.


I had to sell stuff for my sports teams and for school.


I did not do well. If my school's funding were dependent on my ability to sell summer sausage and Wisconsin cheddar logs, all the students would have to share a pencil.


Cooper at least had a legitimate product to sell. My basketball league’s annual fundraiser was this ridiculous Hoop-A-Thon that required me to seek pledges for every free throw I made in some span of time. It even had some suggested minimum donation, as if I were performing some service that required payment. I don't remember what that amount was, but I remember everything about the Hoop-A-Thon was awkward.


After I shot the free throws, I returned to the houses to collect the money, and smartly, half of my neighbors didn’t open the door a second time. I’m not sure who came up with the idea of the Hoop-A-Thon, but it wasn’t the kids who were knocking on doors and hearing people say, “No, don’t answer it! Everyone shut up and he’ll think nobody is here!”

* * *
So anyway, back to the great mulch sale of 2016. It's now over, and we didn't get completely shut out. A few friends and neighbors bought some bags, and then Cooper and I spent several hours on a Saturday delivering mulch. Like all of the kids, he loved it.
He didn't see it as work, but I still think it gave him some sense of accomplishment and of contributing when he delivered the bags. So, yeah, it was worth the time.
Maybe not a home run, but at least a solid single.
ARCHIVED COLUMNS