- November 17, 2018
High school football participation has decreased nationally over the last five years. High schools in dozens of states have canceled varsity or junior-varsity seasons, and in a scattering of cases, schools have cut entire football programs.

And so football is doomed, some people say, from the pros to the pee-wees. It’s destined to get spiked like a football in the classic touchdown celebration.

Not anytime soon, anyway. Football is too ingrained in the history, culture and rituals of America to get run out of the stadium. It’s a huge part of the country’s attitude. And, oh yeah, football still brings in a ton of money.
It’s like Minnesota Vikings receiver Stefon Diggs in that GEICO commercial, where everything sticks to his hands. The NFL has its hands in everything, and the money just sticks -- layer upon layer of it. That’s how the NFL generated about $14 billion in revenue last year. And college football is lucrative enough that a finance professor last year valued three programs – Ohio State, Texas and Oklahoma – at a billion dollars or more.

With that much cash flow, the NFL and NCAA are still raging rivers. The question is, how long will youth and high school football provide the reliable streams of talent to keep those rivers deep?

That’s where the question about high school football comes into play.

Kids still love football. They’re still filling up flag and tackle football leagues here in Texas; they’re still looking forward to their chance to play under the Friday Night Lights; they’re still dreaming of being the next generation of college and NFL players. Those kids are going to play football, whether it’s through high schools or another less organized, more dangerous avenue.

High school football coach Gordon Nehls, the narrator of my novel Fourth Down in Texas, is scared of how football might look without high schools involved. He envisions a dark future in which entrepreneurs and street agents control the sport at the high school level, and he gets a glimpse of that future when confronting a select coach (Coach Coleman) who had been recruiting his high school players. From the novel:

As Coach Coleman stood in front of me, he was more than just a coach I didn’t like. He was the greasy underbelly of youth sports. He was the screaming jackass coaches of third graders, who think they’re Nick Saban or Bill Belichick because they’ve got a whistle, clipboard, and personalized workout gear for their team of eight-year-olds. He was the sleaze behind the traveling recruiting combines that prey on a kid’s hopes and dig into his parents’ wallets. He was the sponsors and money-hungry organizers of national seven-on-seven tournaments, all-star showcases, and bloated made-for-TV events that turn teenagers into profits.
Coach Coleman was all the bullshit surrounding the game I love. And he was the future of it.
“Stay away from my players,” I repeated. 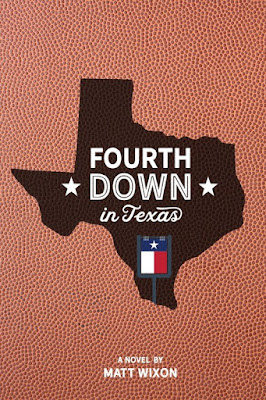 That wouldn’t make football go away, however. It would just threaten high school football – and all the benefits and protections that a teenager gets from certified teachers as coaches, experienced training staffs, the best facilities and safest equipment.

Another excerpt from the novel (which again is from the perspective of Coach Nehls, the narrator):

If you want to be a high school football coach in Texas, you need to get a college degree, go through years of training, work your way through the lower grades, work as an assistant, and then eventually you can become a head coach. And that’s oversimplifying the process.
What do you need to coach some youth football team?
A whistle, basically.
Some youth sports organizations have background checks and a few safety courses. But most of those coaches are Monday Morning Quarterbacks, dads of the players, well-meaning guys who are as out of place as me coaching the Creekside Debate Team. I can live with that when the kids are young, and they’ll eventually have middle school and high school coaches who make sure they’re doing things the proper way.
And that’s not the worst of it. Not even close.
“Football will go on,” I told Lee, “but if the high schools aren’t involved, you’ll put kids in the hands of the Intensity, or the Extreme, or those other club teams. Those clubs are already sprouting, and if high school football steps back, the clubs will grow like weeds. That’s where football will go. It’ll be like those traveling AAU club teams in basketball with all the shady characters.”
“There definitely are some vultures there,” Lee said.
“Hey, there’s money there. You’ve got guys trying to act as agents for kids, and look at basketball with all the transferring and recruiting. And now all these agents or whatever they call themselves -- mentors, handlers -- are getting involved with seven-on-seven. These all-star, traveling teams. When high school coaches aren’t involved, it’s open season on the kids.”

*Fourth Down in Texas is now available exclusively direct from the publisher at www.fourthdownintexas.com.

*Read Chapter 1 here, along with reviews and other information about the book. 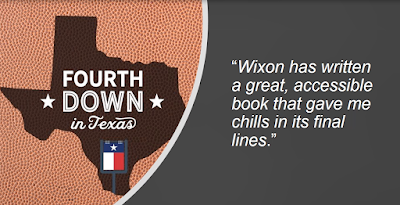