- November 15, 2012
This column, like many others, first appeared in The Dallas Morning News and on DallasNews.com. I let some time pass before posting them here.

Even when the economy is sputtering, we can count on the Neiman Marcus Christmas Book to maintain its over-the-top, absurdly extravagant, “one percent and loving it!” mojo. Or at least I thought so.


Then I heard that this year’s book, which was unveiled last week, features a new house for only $100,000. That sounds utterly practical to me. 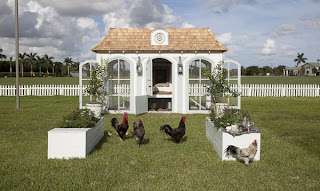 The Versailles-inspired Le Petit Trianon house, described as “the poshest hen house ever imagined,” is one of hundreds of items in this year’s Christmas Book. Quite a few of those items will produce more snickers than well-heeled buyers.

After all, the hen house has a chandelier.

That does add a touch of class for your upscale hens, who might appreciate your Fendi 2Jours Stingray Tote Bag ($7,050). But don’t go into the hen house with your Jimmy Choo Hobo ($5,595), the bag that has tie-dyed fox fur and looks like a purse with a rainbow mullet. The fox is a hen predator, and you don’t want your socialite egg-producers to turn on you.

Other big-ticket items include a walk-on role in the Broadway production of “Annie,” which is $30,000. Dinner for 10 created by four famous chefs will set you back $250,000, plus whatever you stuff into the tip jar. There’s also a video portrait by artist Robert Wilson, called “Snowy Owl,” which shows a stoic owl sitting on a branch.

But the owl does more than only look straight ahead. It stares down, and then suddenly, it moves its head left and right. If that sounds pretty coo, but also a little creepy, you’re close to correct. It’s actually pretty cool and really creepy. It’s also $70,000, and that doesn’t include the cost of installation and the potential emotional scars to hens that think they are being stalked by an owl.

The Christmas Book does have some more affordable items. More than half the gifts are less than $500, including a monogrammed coffee mug. That’s only 10 bucks, although the flashiest feature is that it’s dishwasher safe. Still, it could be a nice complement to a Neiman Marcus exclusive robe ($197) or rabbit-fur trimmed slippers ($188). The Christmas Book also offers a toiletry case – and let’s be honest guys, who among us hasn’t longed for a toiletry case made of woven calfskin? – for $325.

But the fantasy gifts are the Christmas Book’s calling card. The most expensive this year is the set of his and hers Van Cleef & Arpels “Poetic Wish” watches. If you’ve got a million bucks, you’re almost there. These are $1.09 million, but expertly crafted over three years by five engineers and watchmakers, they’re the watches of a lifetime. And if you can stretch your lifetime another 50 years, you’ll only be paying about $60 a day for the pair.

There’s also the 2013 McLaren 12C Spider ($354,000), a convertible that has 616 horsepower, can hit 200 miles per hour and is roomy enough for you and your midlife crisis. Sure, it’s a little ostentatious, but at least you can drive it. That makes it much more practical than some of the items from recent years. 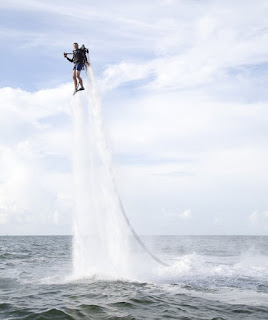 Back in 2003, the Christmas Book offered a $555,000 motorcycle was that so powerful it was never intended to be driven. At least you could save money on a helmet.

The 2005 book had a $3.5 million skycar that was a prototype and had never completed an untethered flight. Hopefully the operator’s manual wasn’t written by the people who do the IKEA furniture instructions.

Now those gifts are crazy. This year’s water-propelled jet pack, on the other hand, is just awesome. It can send you up three stories into the air, and you can zip around at 30 miles per hour as you become the star of a viral video (or perhaps just severely disoriented).

The jet pack has a price tag of $99,500, and that’s a little steep. But wait until Thanksgiving and you can get the jet pack, as well as anything else from the Christmas Book, wrapped and shipped for free.

As for returns, those are free, too. But with gifts as magnificent as a jet pack or a hen house with a chandelier, I doubt anyone ever has second thoughts.