The nightmare of '80s Christmas decorating: One light goes out, they all go out

- December 18, 2013
A version of this column first appeared in The Dallas Morning News and on DallasNews.com. Please check out the site.

------------
The most elaborate Christmas displays, with their lights dancing in a retina-burning yuletide tribute, are dazzling. Some houses are so intricately synchronized and professional-looking that I expect to open the front door and find slot machines, poker tables and David Copperfield.

Even if a display’s vibe is more Sin City than Feliz Navidad, I enjoy the results of the Christmas can-you-top-this. I even watched a little of “The Great Christmas Light Fight,” the ABC reality show that debuted this month.  The show follows decorating gurus (or gluttons) as they search for the true meaning of Christmas -- and heavy-duty extension cords. 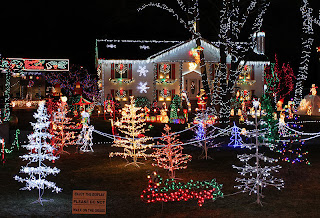 As I put up my own decorations, which offer the dazzle factor of a new pair of Christmas socks, I admire the commitment of the over-the-top decorators.I also think back to the Christmas lights of my youth and perhaps the most scarring element of ’80s holiday decorating:

One light goes out, they all go out.

“Twinkle lights” they were called, but they were more like torment lights. Putting them up with my dad, I learned some impressively inappropriate words to share with my fellow fifth graders.

Not surprisingly, the one-and-done era of lights didn’t produce the magic of today’s displays with thousands, or even hundreds of thousands of mini lights. There weren’t the reliable, energy-saving LED lights of today or color-changing sets with remote controls. We didn’t have computer software that synchronized lights to music.

The great customization of mini lights 30 years ago?

And yet I look back on those days fondly, realizing that, yes, my memories are severely warped by nostalgia. Lights were more expensive and less reliable back then. They were also more dangerous, since some of the larger bulbs got hot enough to burn your fingers. Deck the halls with boughs of holly, f-f-f-f-find a fire extinguisher.

But what I remember, hopefully accurately, is that we tried really hard. 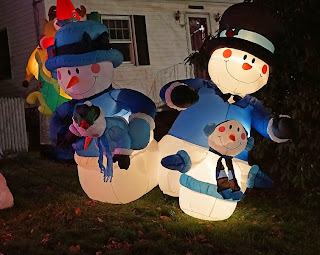 To compensate for less lights, including the agonizing unlit strings, we added wooden cutouts and lit-up plastic figurines and awkwardly moving, unintentionally spooky, animatronic Santas that appeared to have the drug-withdrawal shakes. Front yards were crowded with the intermingled joy of Mickey and Minnie Mouse, Snoopy and Charlie Brown and Kermit the Frog and Miss Piggy. The characters might’ve been close enough to a nativity setup to create confusion about the first Christmas, but the scene was clearly merry.

Sometimes it looked like we had drank a little too much eggnog while decorating. Rudolph's red nose sometimes looked like it was lighting the way for the three wise men to find the baby Jesus, who was in a nativity scene that included Elmer Fudd in full hunting gear.

But again, it was a merry scene. And garish, I suppose. In poor taste, some would say.

But I kind of miss that about today’s Christmas lights. Much of it now is so well done, so polished, so sophisticated, so professional.  I miss seeing some of the amateurish-but-exuberant elements of Christmas displays. They made me feel better about my displays, especially when my enthusiasm can't mask my lack of style.

I think the creations of the Christmas-light gurus might even discourage some people from putting up their own lights. You know, how can I compete with that?

But unless you’re on “The Great Christmas Light Fight,” it’s not a competition. It’s about expressing your feelings during the holiday season. That could mean a few clear lights and a beautifully serene nativity scene. Or it could be a spinning inflatable snow globe that looks like a mirror ball for a Christmas disco mash-up of Frosty the Snowman, Santa and eight not-so-tiny reindeer.

Just like when giving gifts, it’s the thought that counts. And if your Christmas lights make the season brighter for you, they’ll do the same for someone else.

Most-read columns:
The back of the station wagon: Awesome and dangerous
Old memories, new bruises while roller skating
Yes, my 4-year-old fainted when he thought his mom had been turned into a robot
In praise of dogs, in memory of Maggie
Where's the actual cat?
My aging dad's unintentionally alarming voice mails
Truth in customer service