Clever headline, but kind of inappropriate for a tragedy when a house burns down and the story includes this:
"She ran out the house screaming that her father was in the house," said a witness standing on Zaitz Farm Road near the wrecked household. "The father came out a little confused. Windows were popping, and people were screaming."
I think this would be a time to be a little more McTactful and not give the impression you're McRibbing the family during a time when many of their possessions probably flamed out like a McDLT.
Read more

- July 17, 2008
I haven't watched the summer reality TV filler I Survived a Japanese Game Show, but if it has anything like the video below, use of the word "survived" is appropriate.

- July 16, 2008
On Monday night, I discovered that there is still a Miss Universe. This probably shows how out of the loop I am concerning the all-important industry of Pageants and Prettiness, but I'll admit it.

Anyway, thanks to having a strange curiosity for the pageant and a wife who watched the whole thing, I watched the final hour or so. That was enough time to show me that a beauty-pageant contestant falling is sad, and yet very funny, and also that the Miss Universe Pageant is just plain weird.

I guess there is no more talent competition, or at least that isn't shown on television. Perhaps it's because finding talent is getting more difficult, as shown by the show "America's Got a lot of Time to Fill and Very Little Talent" that airs on NBC. Or maybe it's because the Miss Universe contenders are busy with their other interests. One of the contestants listed her interests as shopping and spending time with family. Holy cow! At least make something up that gives you …
Read more

The product somebody has been searching for

- July 16, 2008
I give credit to Dave Barry's blog for finding this. Mainly because I don't want anyone to think I was looking for it.

After finding out about this product, I found some others talking about it:

Wait! I recognize that burglar

You're a woman working at a restaurant, a man comes in to rob you in a disguise. Your co-worker attacks the burglar, knocks off his wig and then you scream,

Even more strange for the woman ... her husband was driving the getaway car. And her mom was in the car.

Here are some more details for the family scrapbooks.
Read more 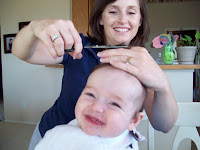 My son Nathan, although only 5 months old, already has more hair than I've had in about 10 years. The hair is so long on top that he was starting to get the Cosmo Kramer look.


I kind of liked that look, but my wife decided it was time for Nate's first haircut. We thought this could be a very traumatic experience for him, but as you can see from the photo, he liked it. He might actually be laughing to taunt me because he has such nice -- and so much -- hair.
Actually, Nate seems to like just about everything these days. He really likes it when his older brothers talk to him, or anyone for that matter. But even staring at the ceiling fan for 15 minutes is wildly entertaining for him.
Read more

Humor Me: An appointment men hate

A Harris Interactive survey last year revealed that many American men don’t go to the doctor for preventive care.

Maybe “revealed” isn’t the best way to describe the survey’s results. It seems more of a confirmation of common knowledge, such as “babies are cute” and “cancer is bad.”

We know most guys don’t go to the doctor. If it’s an emergency, sure. And if it involves sexual dysfunction, well, that qualifies as an emergency darn near Code Blue. But for other health matters, ignorance is bliss and doesn’t involve sitting in a waiting room reading a Reader’s Digest from 2006.

Colon cancer to is expected to kill nearly 50,000 Americans this year. But the Center for Disease Control estimates that 60 percent of colon cancer deaths could be prevented if all men and women age 50 and over were screened…
Read more
More posts