Remembering 12 CDs for the price of 1 (with nothing more to buy ever!) 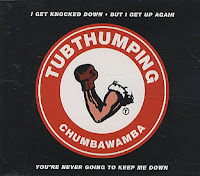 Just about everyone has a few head-scratchers in their music collections. You’re looking through your compact discs, finding more than a few that you haven’t listened to in years, and then come across something like this:

“Tubthumper” by Chumbawamba.
Wait a second. I own that? I bought that?
A lot of people did. It sold three million copies in the United States back in the ’90s, driven by the hit single “Tubthumping.” That’s the song that concussed everyone with the chorus of “I get knocked down/But I get up again/You’re never going to keep me down.”
Maybe you have similar outcasts in your music collection. Perhaps something by Color Me Badd, the Spice Girls, a boy band or any album by the Spin Doctors not titled “Pocket Full of Kryptonite.” Or maybe “The Best of Shaquille O’Neal,” an album that obviously could never be confused with the worst of Shaquille O’Neal. He’s that talented musically.
Or hey, what about “Music for the People” by Marky Mark and the Funky Bunch?
Come on, somebod…
Read more
More posts