I'm an adult, you can't scare me on Halloween 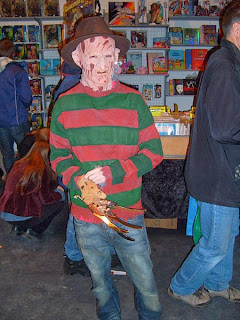 A version of this column first appeared in The Dallas Morning News and on DallasNews.com.
------------------
For a month now, I’ve been driving by billboards for haunted-house theme parks. They’re not very subtle, of course, but they are very effective.
The billboard for Dollz Haunted House, featuring a doll with piranha teeth, grabs your attention. And the sign for Dark Hour, with a Freddy Krueger-like guy experiencing serious dental issues, gets in your head. I also thought WinStar Casino had a haunted house until I realized the creepy-looking guy on its billboard is singer Robin Thicke.
(The look on his face is ridiculous. But, then again, he is pretty ridiculous. He's certainly creepier than his Beetlejuice lookalike.)

The Dallas-Fort Worth area has nearly two dozen haunted attractions, and these places go way beyond someone jumping out and yelling “Boo!” The elaborate sets, high-tech special effects and animatronics are perfect for people who like a really good fright.
Tha…
Read more
More posts