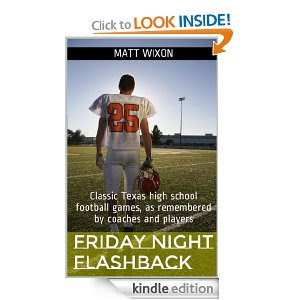 ﻿ As a side project to what I do at The Dallas Morning News, I decided to put together a book that revisits some of the classic matchups of Texas high school football and shares the memories of players and coaches who were part of the games. Some of the players and coaches reveal stories behind the unforgettable plays. Others give a glimpse at what the amazing moments mean to them years later.

Friday Night Flashback is now available on Amazon.com. It can also be viewed on a Kindle device or on free apps for the iPhone, iPad and Android phones and tablets.

Here's the link to the book:

Here are the links to free apps for iPhone, iPad and Android