Humor Me: Zooey Deschanel, the iPhone and "intelligent assistants" 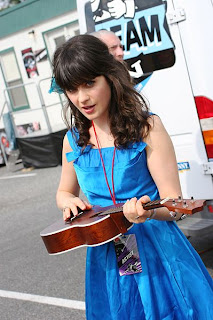 A list of the most divisive topics in this country could include abortion, capital punishment, gun control and global warming. Actress Zooey Deschanel might fit in there, too.
Deschanel has been in a lot of movies over the last decade, and now she stars in the Fox sitcom New Girl. She’s also the star of a Facebook page titled “I hate Zooey Deschanel.”
So what’s to hate?
Oh, I don’t know. Deschanel is obviously talented, and I think her New Girl show is pretty funny. But when you’re a 32-year-old who dresses like a 5-year-old, when you have a name that’s cutesy enough for a Cabbage Patch doll, and when you seem determined to achieve impossible quirkiness, you’re going to be a target.
Of course, none of that really matters for this column. I just needed to provide some background for those who might not know Zooey Deschanel, who is now appearing in an iPhone commercial.
The commercial starts with a close-up of Deschanel standing in her hipster apartment, which includes a piano, banjo, l…
Read more
More posts